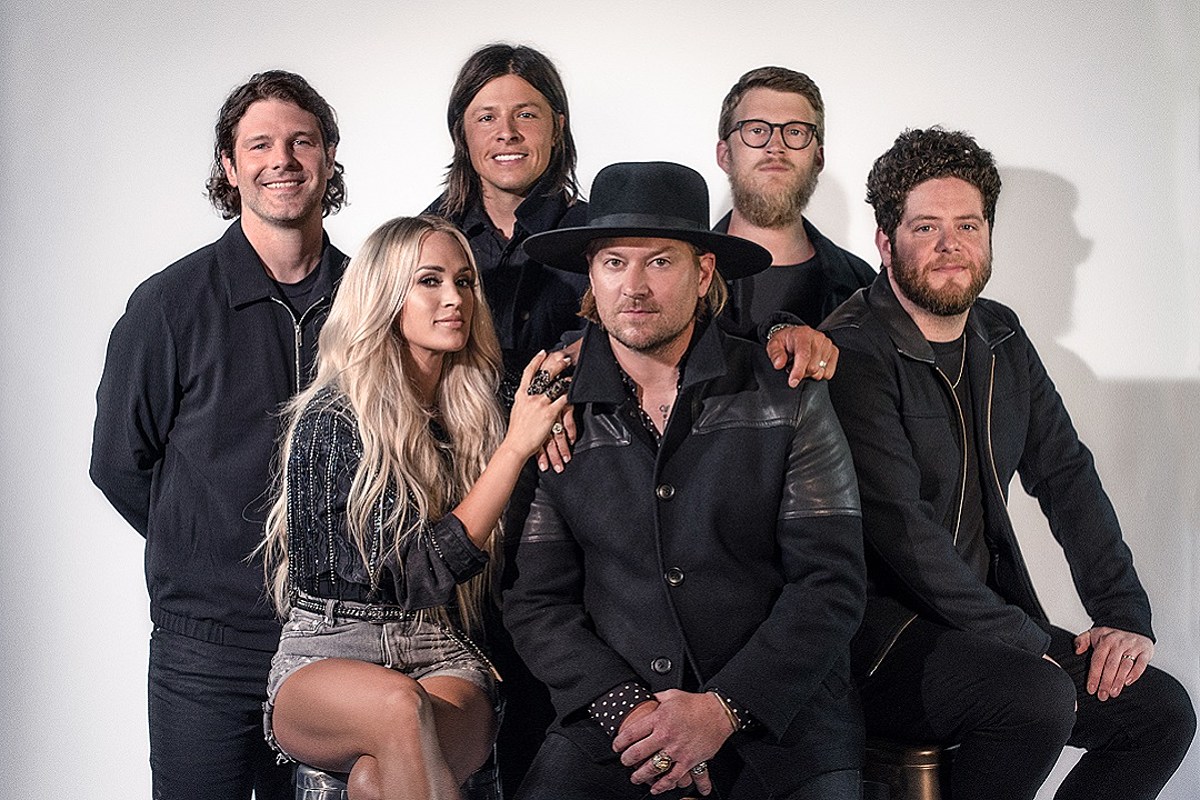 After working with Needtobreathe's Bear Rinehart on her recently released gospel album, Carrie Underwood is returning the favor. The country superstar teams up with the rock band on their brand-new single, "I Wanna Remember," released on Thursday (May 20). Needtobreathe explain "I Wanna Remember" as "a nostalgic track and takes you back to the moments you never want to forget." Throughout the song, Underwood acts as sixth member of the group, seamlessly taking lead on the second verse and adding harmonies throughout. "I Wanna Remember" is one of 12 songs on Needtobreathe's forthcoming new album, Into the Mystery, due out on July 30.

DAILY MAIL - Cardi B keeps a low profile in a hoodie as she makes her way through JFK Airport in New York City
42.83% MORE objective
-2.09% LESS positive

Cardi B was spotted making her way through JFK Airport in New York City on Friday morning. The 28-year-old hitmaker appeared to be keeping a low profile as she kept her hood up and face covered as she strolled along the travel hub's walkways. The rapper's outing comes as she continues to work on a collection of songs that will be released on her upcoming second studio album. Her debut studio album, entitled Invasion Of Privacy, was released in April of 2018 and was met with highly positive critical reception. Her most recent single, Up, was released in February and is expected to be included on her upcoming second studio album.

Lana Del Rey has dropped three new songs. Album out July 4thBLUE BANISTERS pic.twitter.com/q37PDKeyy5 — Lana Del Rey (@LanaDelRey) April 28, 2021You can listen to all three songs below. View this post on Instagram A post shared by Lana Del Rey (@lanadelrey)Also, I’ve said this before and I’ll say it again. I remember the cultural shift when I was in college and Lana Del Rey blew up. Gentlemen, if you’ve never dated a serious Lana Del Rey fan, I can’t suggest it enough.

Mdou Moctar has previously claimed, “I don’t know what rock is exactly,” and that’s a good thing listening to the Niger-based Tuareg singer-songwriter’s latest album, Afrique Victime. “Chismiten,” the first track on Afrique Victime, opens with the sounds of crickets and a rooster’s cock-a-doodle-doo before Moctar’s guitar takes over. None of the songs on Afrique Victime progress like typical rock songs. If Ilana was his guitar album, Afrique Victime is the record where his guitar’s voice is as important as the one in his throat. The biggest feat here, though, is how Afrique Victime feels upbeat and hopeful from start to finish.

Nearly four years after the death of the Tragically Hip singer Gord Downie — and three years after the band announced their retirement — the beloved Canadian rockers have revealed their surprise new album Saskadelphia, due out Friday, May 21st. Saskadelphia features six songs written for the Tragically Hip’s 1991 album Road Apples; five of the tracks were recorded during the same 1990 studio sessions in New Orleans, while the sixth (“Montreal”) was recorded live during the band’s Montreal concert in 2000. It was crazy.”However, one track from the sessions wasn’t found on the tapes: “Montreal,” a song about the École Polytechnique massacre of 1989. “Gord Downie wasn’t sure about the lyrics, so a road manager pulled them up on the Internet. He did a quick once over and said, ‘OK, we got this.’ Then, we went out and played like we had been playing it forever.”Over 30 years after the songs were recorded, their “new” album Saskadelphia marks a closing chapter for the Tragically Hip.